Scalding my new partner’s fingers wasn’t exactly part of my plan as I tackled unit two’s pate a choux theme with a wee bit of gained confidence that was quickly foiled by fumbling hands (mine) dipping choux into superheated caramel that spilled unexpectedly onto a squealing Deborah Valentine. No, that’s not her porn name—she’s an award-winning radio anchor and news director at WGHT Radio in New Jersey who goes by Deborah Schachtel when not hosting her early morning show. She’s also a great class partner with lots of new blisters. Well, for what it’s worth, at least she’s doing radio instead of modeling cheap rings to bored housewives on QVC, so nobody has to look at her bandaged digits.

Before tragedy struck, we were making a St. Honoré cake, hich is named after the patron saint of... pastry! Yes, there’s a patron saint of pastry, one who’s altar is filled with the most fantastically fatty snacks imaginable, or at least it should be. I’m guessing he also possesses such a rotund physique and beefy belly that would make Buddha look like an emaciated Fashion Week model. The completed cake, while quite rich, was divine in small doses. 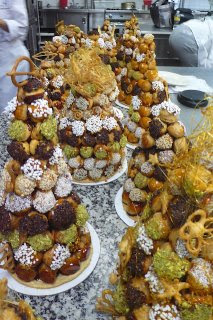 We made several things with pate a choux dough this week, including éclairs, profiteroles, swans, and dramatic towers of decorated choux called croquembouche (pictured). The choux are held together by dipping them in more hot caramel (what goes around, comes around: I was burned this time!) and placing them on a base that is traditionally a circle of baked pâte brisée.

Pate a choux dough is made by combining bread flour, water, butter, salt, and sugar in a saucepan and cooking it until it becomes quite thick and most of the moisture is removed. The dough is then placed in a mixer and loaded with eggs until a batter is formed that can be easily piped onto baking sheets, yet still maintain its shape. The batter more than doubles in size in hot ovens using the power of steam given off from the moisture in the eggs, remaining water, and butter. The baked shapes, depending on what is being made with them, are often filled with various fillings such as pastry or whipped cream.

Saturday morning marked the end of the pate a choux unit, and that also meant another written and practical exam was waiting for the class when we groggily shuffled in. We all made éclairs as part of the practical portion, filling and coating them with chocolate, coffee and vanilla flavored pastry cream and frosting. Paris Brest was our other assignment for the test. It’s a circular dessert that is named after the bicycle race between Paris and Brest and is supposed to resemble a bicycle tire, with the praline cream filling piped in such a way to look vaguely like spokes. Things are really coming together in class and we all seem to be in a good working rhythm—it was much less nerve-jangling than the first exam, to be sure!
Posted by Nathan Noland at 6:15 PM