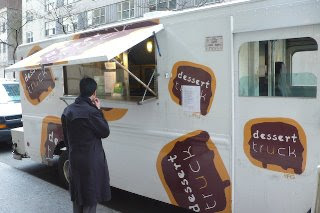 Traffic in midtown can be brutal at any time of day, let alone during lunch or rush hour, and nobody knows this better than Jerome Chang, a 2004 grad from The FCI who started Dessert Truck in late October of 2007. Operating out of a converted delivery truck that’s been pimped out with modern restaurant equipment and repainted with a funky logo, he makes his way through car and people-jumbled streets day after day in search of Manhattan’s version of El Dorado: a legal street parking spot. Even in the most compact of vehicles, it can be a hair-pulling task, but Jerome says that securing a spot with his behemoth-sized hunk of metal and tires is often his most challenging moment of each day, one that often entails circling and waiting for over an hour for a spot to open up, and sometimes giving up altogether.

The Parking Gods were with us the day I rode along with Jerome earlier this week, as we swiftly made our way from the preparation space he rents out in Hell’s Kitchen to his daytime location on 55th and Lexington. I climbed out of the truck to help guide him as he parallel parked with surprising ease into an open spot while lunchtime customers already lined up to load up on sweets.

Parking is just one of the many obstacles Jerome has encountered since starting his successful mobile venture of serving decadent restaurant-style desserts in an unexpected, ice cream truck-like setting. Foul weather and mechanical failures are an unfortunate pair of business-closing obstacles that, while stressful to contend with, at least give him a cherished day off once in a great while that Jerome uses not for rest, but to conjure up sweet new creations, such as the meringue, mousseline, red fruit gelée, and yogurt ice cream that will debut on the menu soon. His popular goat cheesecake with rosemary caramel and fresh blackberries is also making a return to the menu this week.

Even with a slew of good press that came his way shortly after opening up Dessert Truck, past experience as a pastry cook at the famed Le Cirque, and mentoring from Chef Michael Zebrowski, a fellow FCI grad and the Executive Pastry Chef at the Westin Governor Morris in New Jersey, it hasn’t been an easy task for Jerome to introduce high end desserts to the public in this decidedly laid back format. “I think we're just a small part of a movement in this country where people are basically learning to expect more from their food. The whole idea behind our truck and many of the newer gourmet trucks is to make thoughtfully made food more accessible. It seems that in this country, industrially produced food is much too available and fine handmade food much too hard to get.” Jerome went on to comment on the plethora of cupcake establishments saturating the baking industry and how that has altered people’s concepts about American desserts in a potentially negative way and added, “I think that is reflected in what people expect from desserts. For many of them desserts are either pre-packaged cookies and pound cakes, cheap sundaes and Danishes or really fancy plated compositions in high end restaurants. Hopefully, Dessert Truck is helping to bridge the gap between those two extremes.”

From the looks of the consistently long lines that form outside of Dessert Truck’s evening location on 3rd Avenue and St. Mark’s Place, I would have never guessed that the issue of high end dessert acceptance ever existed. I got in line late last night and witnessed a slew of young East Village hipsters eagerly snatching up order after order of molten chocolate cake with olive oil, sea salt, and vanilla ice cream and bread pudding with a choice of vanilla or bacon custard sauce, Jerome’s two best-sellers and staples that remain on the menu year round. But Jerome insists that New York is possibly the only city that could have supported his business model from the outset, yet in that same breath excitedly adds that expansion to other cities is something that he’s frequently weighing and considering, although he remains mum on precisely which cities he's contemplating expanding to.

Growing up in Prairie Village, Kansas (a suburb of Kansas City), Jerome didn’t have many obvious foodie influences to build from in his own immediate family. “I always loved food, but maybe never fully acknowledged my passion for it. It was like something one grows up with but never really notices until they've come back home after a few years in college.” Jerome thinks that, no matter how successful any business becomes, it’s all about teamwork and approaching each new assignment with humility and respect, values he projects regularly upon himself and his current staff of eight employees.

When I asked Jerome where he sees himself in five years, he laughed and replied playfully, “Sitting on a beach somewhere in Mexico, with a small kitchen set up somewhere for creating new recipes.” And with his talent, diligence, and determination, I’m betting he’ll be soaking in the rays there sooner than he thinks. My guess is, though, that he wouldn’t stay there for long—he loves his job too much. And that’s a good thing for fans of Dessert Truck such as myself, who can’t go more than a few days without a shot of the super rich hot chocolate.