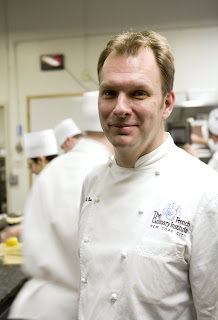 Chef Nils Norén, Vice President of Culinary Arts at The FCI, will compete for the Master title alongside 23 other well-known chefs and previous judges on Bravo's upcoming spin-off, Top Chef Masters, premiering on June 10 at 10pm ET.

Following the original Top Chef format, each episode will feature two challenges in which four chefs compete against each other to name one winner. In the final four episodes, the six winners will risk elimination each week until the final two remain to fight for the grand prize of $100,000 donation to the charity of their choice.

Watch the interview on Bravo's website to learn more about Chef Nils and Top Chef Masters.
Posted by The International Culinary Center at 3:05 PM