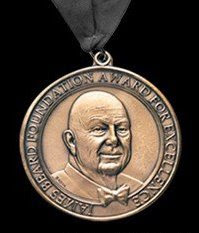 Founder and President of The FCI, Dorothy Hamilton was inducted into the prestigious Who’s Who of Food & Beverage in America, and Dean of Food Journalism, Alan Richman, won in two categories, Magazine Feature Writing without Recipes, and Writing on Spirits, Wine, or Beer for his pieces in GQ, "Made (Better) in Japan," and "Viva La Revolucion!"
Read the press release.
Posted by The International Culinary Center at 2:44 PM