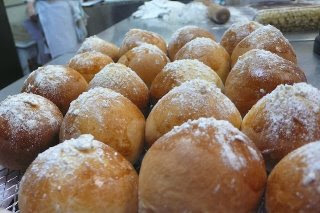 Chef Cynthia announced to the class at the beginning of the Viennoiserie unit that this is when she suggests we all join a gym, and she wasn’t kidding, as I’ve been eating the orange swirl bread, challah and Sally Lunn Buns (pictured) pretty much nonstop. Viennoiserie are baked goods that are created from a yeast-leavened dough that often contains rich ingredients such as eggs, butter, milk, and cream.

We swiftly navigated from puff pastry directly into Viennoiserie, which is related in a way given that several of the recipes, such as croissants and Danishes, use similar techniques of rolling butter into the dough, folding it, and rolling it again to create layers of flakey, buttery pastry in the final baked product.

My new partner for the unit, Amanda Beun, just turned 21 last week and has been working as a cake decorator and bakery manager for Stop & Shop since she was 16. She has plans to open up her own bakery in the next couple of years… I wish that I was half as organized and driven at such a young age as she is, and I can’t wait to see how her education at The FCI is going to sharpen and influence her already considerable talent!
Posted by Nathan Noland at 12:33 AM