The Nate Update: A Controversial Kiss 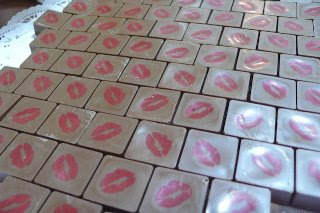 By the time I arrived at the Hudson Street location of Jacques Torres a little after noon on Wednesday, there was already a small group of people surrounding a woman holding a tray loaded with one of Torres’ creations—the Champagne Kiss. There was also a public relations team on hand for fielding questions and a camera crew lurking in the background to capture all the action and get quotes from customers on the unfolding drama between Hershey’s Corporation and Jacques Torres that’s been the source of much discussion in the news as of late.

There was a ballot box next to the chocolate-wielding woman where samplers could decide for themselves whether Torres’ square, flat, champagne-laced confection stamped with red lips resembled anything like Hershey’s foil-wrapped Kisses, a debate that was set off in early April when Hershey’s, claiming trademark infringement, issued Jacques Torres a cease-and-desist order regarding his new Kiss.

I was more than content with eating free treats and managed to steer completely clear from making statements on camera regarding Torres Gate (besides, it’s not polite to talk with my mouth full), but from what I could see during my time there, nearly every visitor was siding with him. Chef Torres has also taken the battle into cyberspace by launching SaveJacquesKiss.com, where you can sign a petition and voice your opinion on the matter, receiving a coupon for free samples of hot chocolate or bonbons for your time—what are you waiting for?!
Posted by Nathan Noland at 12:32 PM