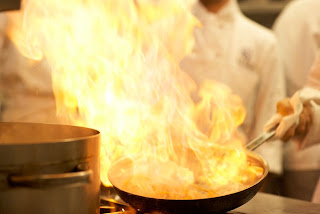 Gordon Ramsay's reality cooking show is back for a sixth season, premiering on FOX tonight (July 21) with a two-hour special from 8-10pm ET.

This season of Hell's Kitchen will feature 16 new chefs, including FCI alum Amanda Davenport (Classic Culinary Arts '06), competing for the grand prize of a Head Chef position at Araxi Restaurant in Whistler, British Columbia.
As in previous seasons, each episode will feature rigorous culinary challenges, and one chef will be sent home each week. But according to Chef Ramsay, the quality of cooking and personality on the show this time around have greatly improved, allowing for more creativity in terms of the challenges and menus. "I think we've got some exceptional chefs, which may turn out to be a bit of a surprise I think," said Ramsay.
He also noted that this season's contestants tend to be more confrontational than in the past, at times "talking back" to Ramsay. Sounds like the level of drama fans have grown to love!

Posted by The International Culinary Center at 10:34 AM