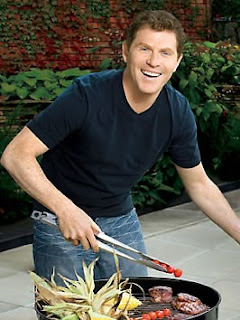 Tune in on Sunday, August 16, at 10:30am to watch Bobby Flay Grill It! with his guest, fellow FCI alum Jamie Watson. Jamie will be making his version of the classic pork shoulder sandwich, with cole slaw and cornbread flatbread, paired with his own cocktail creation, the Julito. Also on the menu is Bobby's Korean-inspired pork dish served in lettuce cups, and a Blackberry Bourbon Julep to wash it down.
Bobby Flay is a critically-acclaimed chef/restaurateur, award-winning cookbook author, and television personality with two shows bearing his namesake. He is Resident Chef on the CBS News Early Show and one of four main Iron Chefs on Iron Chef America. He even has eponymous lines of sauces, rubs, kitchenware, textiles, and grilling accessories. And he did it all after graduating from The FCI's very first class of 1984.
Don't miss Grill It! with Bobby Flay on the Food Network, Sunday, August 16 at 10:30am!
Posted by The International Culinary Center at 2:50 PM