25 Years at The French Culinary Institute 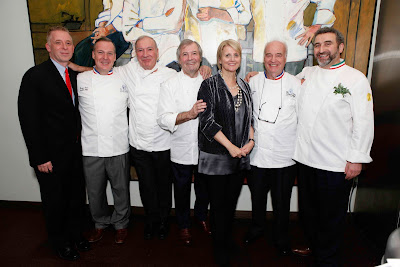 On November 11, The FCI celebrated its 25th anniversary with a panel discussion about the past, present, and future of French cuisine. Guests included some of the most prominent chefs, journalists, and professionals in the industry.
FCI Founder Dorothy Cann Hamilton led the panel of industry heavyweights, Michael Batterberry, Founder and Editor in Chief of Food Arts magazine, Eric Ripert, Executive Chef/Owner of Le Bernardin, Drew Nieporent, Owner of The Myriad Restaurant Group (Tribecca Grill, Nobu, Corton), and FCI Deans, Master Chefs André Soltner and Jacques Pépin.

While each spoke to different aspects of French cuisine, panelists generally agreed that French cooking excels in transforming and elevating food to new heights, while preserving the integrity of the ingredients themselves. It was also agreed that French cuisine is often misunderstood in America, associated with the fancy, snobbish hospitality that is no longer popular instead of the rustic, regional cooking of France. However, it was noted that many of the fanciest French restaurants are still extremely successful.
After the panel, the celebration commenced with passed hors d’oeuvres of consommé shooters, savory choucroute, oysters, and caviar prepared by FCI culinary students. To drink, guests enjoyed liquid nitrogen-frosted apple margaritas made by VP of Culinary and Pastry Arts Nils Norén, and were encouraged to take Skål shots (with obligatory photograph), a Scandinavian toast of Aquavit inspired by 1960's Swedish actor Max Von Sydow.

Here's to another 25 years!
Posted by The International Culinary Center at 5:28 PM