If you are into food, cooking, or baking at all, being in the kitchen is a great way to spend your time. And a great place to learn a lot. But the food world is deep and wide, and there is also much to learn outside of the kitchen. For students who want to enjoy trying different restaurants, checking out local purveyors, or discussing the latest round of cookbooks, the school offers a plethora of clubs and extracurricular activities. 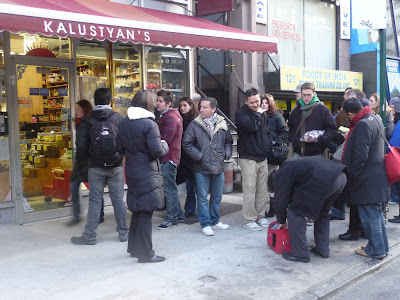 Yesterday, a group of about 15 students and a few staffers traveled up to Kalustyan’s for an ingredients highlight tour with Dave Arnold, Director of Culinary Technology. Anyone who knows anything about Kalustyan’s and knows anything about Dave Arnold would place a safe bet that this would be one fantastic adventure. For those of you who may not know anything about either of these things, consider the experience somewhat parallel to Willy Wonka and the Chocolate Factory but without the didactic candy experiences. In lieu of chocolate rivers and bubble gum dinners, we sampled immature walnuts, menthol crystals, celery bitters, sulfuric-smelling black salt, pandanus leaf, black peppercorns from around the globe (replete with baguettes and butter packed in from The FCI), ground black cherry pitts, Turkish delight, charoli nuts, stuffed dried chiles, and preserved lemons to name just a few. It was an entire circus of food wonders, creating a ping-pong of varying sensual responses. 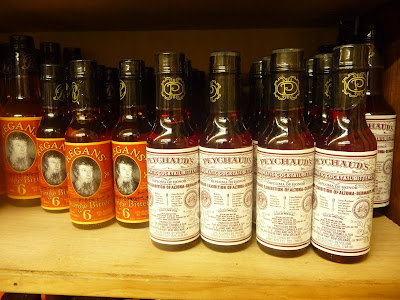 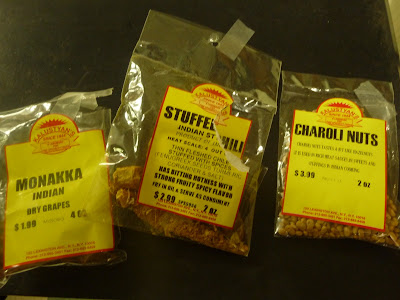 Dave started the tour by smoking wild rue—used by Ancient Romans—for us to smell. He then proceeded on to a discourse on bitters, followed by several personal anecdotes relating to ingredients as he picked them up from the shelves. Dave has that vein of brilliant creativity and curiosity that is the mark of any true mad scientist and generously shares his enthusiasm for taking an ingredient he knows nothing about and trying to see what he can do with it through a proliferation of stories. He’s also a voracious seeker, perpetually reading, learning, and experimenting, which makes him interactive as he wants to learn from others in the process of sharing what he knows. As we have a rather internationally diverse student body, we were able to have a very dynamic conversation about products from around the world. The already interesting tour was even further enriched when a student had something to say about an ingredient that perhaps no one else had really used because it was part of their cultural food history. 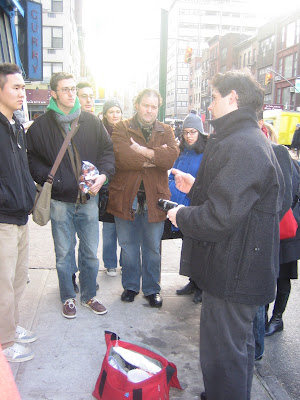 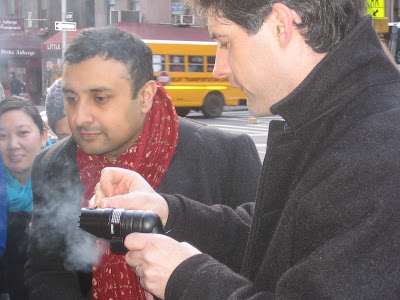 Want to know what you would do with black salt that pungently smells like nearly-rotten cooked eggs? In India, it is added to cool water along with other spices for dipping stuffed and fried dough. Sounds pretty good to me. Asian students piped up about how they used pandanus (screwpine leaves). And a student from Turkey gave us the official word on Turkish delight. There was even a chile challenge, with one brave pastry student willing to take all the heat without shedding a tear.

What we learned was to explore and not be afraid to try new things. We also learned that the next time a recipe calls for fresh tamarind, we know where to get it. And although I have been to Kalustyan’s often in my 11 years in the city, I still found new things to cook and bake with and enjoyed the raft of Dave's random food facts and interesting side notes that went along with the tour.

Leaving with 80 cents worth of dried sour red plums (one of Dave's recommendations) in my bag to eat on the way home, I was reminded how fun it is to go where you haven't before—be that a new city, a new book, or just a new flavor experience.

Dave Arnold's Preserved Lemon Soda: mash preserved lemons with some granulated sugar in the bottom of a pitcher; top of with seltzer; strain into glasses; drink away.

Posted by The International Culinary Center at 4:53 PM