Serving More Than a Good Brunch

Most chefs wear their heart on their plates—well, at least metaphorically. And on Sunday, January 24th, L'Ecole, the school's restaurant, served up a little more love than usual by donating 100 percent of the revenue from brunch service for the day to the American Red Cross Haiti Relief and Development fund. 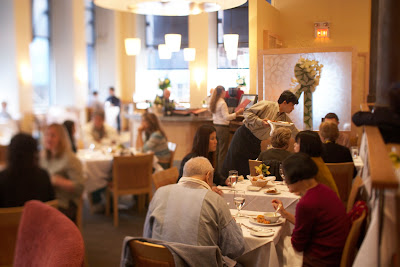 It was a good experience for all: Diners were happy to know that they were doing something for others just by going out to eat, and the staff appreciated the opportunity to participate in the event as well.

Siobhan Spargo, a server at the restaurant, said, "People were very receptive when we told them that the proceeds of the day were going to charity. Many people didn't know beforehand that they would be donating to a good cause. Guests were willing to spend a little extra, buying plenty of drinks. Overall, people thought is was cool. And several employees from the school came in to eat because they knew the money was going to the relief fund. One diner and her friend came in to eat, and she wrote about it on her blog, The Skinny Pig. It was fun personally, too. Usually no one wants to work brunch and have to get up early, but it was nice working for a good cause; we were all in good moods!"


Daniel Low, who works front of the house, aptly stated, "The school could have given in many ways. It was ingenious to let our community participate [patrons, students, and employees] in something everyone believes in supporting. It was the perfect way to give back. It allowed people to have control on how much was given."

The French Culinary Institute is also lending a hand by matching employee donations to the American Red Cross, Save the Children, Unicef, and Chefs for Humanity.
Posted by The International Culinary Center at 12:26 PM