I had the extreme good fortune of joining Rhonda Lynn in Student Affairs and The FCI Supper Club for an epic 16-course dinner last week at Brooklyn Fare. I feel a special connection to Brooklyn Fare: I live on Schermerhorn Street, just two blocks from the place. I watched it being built last year. Alan Richman’s recent article reminds readers that they have very little chance of getting in. Well, last summer, Brooklyn Fare actually called me with an invitation to dine. I took them up on it with nine friends and coworkers and enjoyed a stellar meal. Nothing had been written about it at the time, and we had no idea what to expect. We were blown away that night over eight exquisite courses. 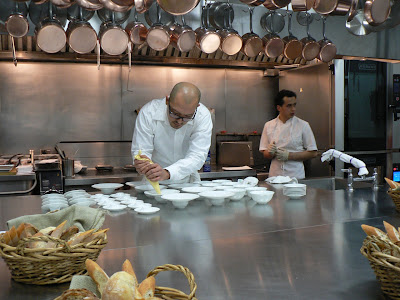 I’m happy to report that it’s even better now than it was then. César Ramirez, the chef, is a great talent of the kitchen. And he’s old school. He doesn’t believe in slapping his name on a restaurant and then showing up in clean whites at 8 p.m. to glad-hand patrons in the dining room. He’s in it for the work. Every time I shop at Brooklyn Fare, I see him running around. He preps all day and cooks through service. FCI people develop a reverence for this kind of chef, after being exposed to the likes of André Soltner and Alain Sailhac. We know it when we see it, and César has got it. When students asked him for some general career advice, he bluntly told them that he was twice-divorced, and that you have to be willing to put your career first or you’re in the wrong business (this man knows how to work a room!). He said the minute he loses that fire, he’ll leave the kitchen. 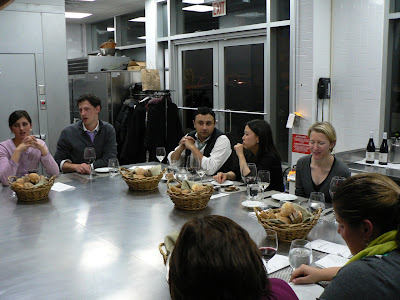 Brooklyn Fare is one-of-a-kind in New York City, and certainly in Brooklyn. You enter right on a dumpy block of Schermerhorn Street and find yourself in a spotless kitchen. Gleaming stainless-steel tables stretch out before you; a hundred polished copper pots hang above you like an art installation. César’s minions have set the table with excellent flatware and overflowing baskets of bread, and your wine is set up on a rear table with several varieties of good-quality glassware. César and his assistant, Juan, are milling around, and no one is sure quite what to do. And then the food starts to materialize, seemingly out of nowhere. The place is so clean, you can’t tell that anyone has been cooking. The first canapé was a beautiful little shot glass of hot carrot and orange purées with salty Greek yogurt on top. Where did this come from, and how is it so bracingly hot in this little glass? The meal was full of mysteries. Juan moves around like a phantom, frying brains, retrieving items from the walk-in, sautéing things. César is a picture of calmness in his crisp white shirt, scooping caviar, piping crème fraîche, layering all the elements perfectly for the nine of us, all the while chatting away. 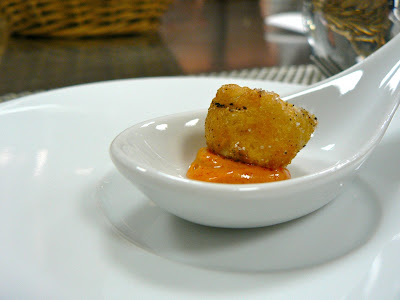 Standouts of the night included poached king crab with cold hollandaise and a heaping teaspoon of caviar; milk-fed veal with onions soubise; fried calf brains (César’s favorite) with smoked paprika sauce; a perfect Kumamoto oyster with crème fraîche and a disk of grapefruit gelée. I can’t get the bacalao and shredded black truffle out of my head. It was served in these bizarre magnetic cups on angled saucers. He told me they cost $130 apiece and that he’s the only person in the United States who has them. 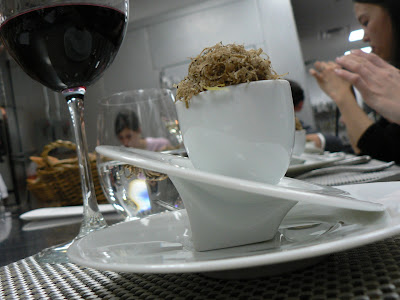 César seems to basically get anything he wants to work his magic, from the dishes to the ingredients: bluefin tuna, Hudson Valley foie gras, the caviar, the truffles. It’s a parade of luxury under flourescent lighting, and a steal at $95 (and still BYOB). It’s the only place we know of where you get this kind of experience and connection with the chef. He constantly goes around the table with his eyes and makes sure everyone likes each dish. It’s like the dinner party of your dreams, the one that you can’t actually pull off. 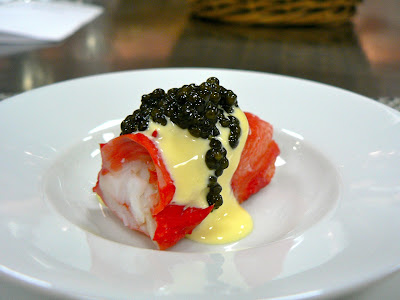 The students who took the leap of faith ($100+? Brooklyn?) were glad they did. Level 3 student Catherine thought the meal was over halfway through (after the eighth canapé). Greek student Iris, a proud fish snob, approved of the freshness of César’s seafood. We were giddy by the end of it—pleasantly full but not stuffed. The conversation with the chef kept going over glasses of red wine, the students trying to gather as much advice as possible before heading back into the cold. 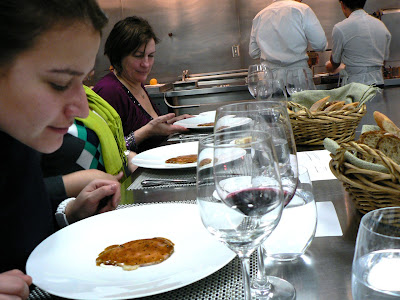 Brooklyn Fare is a special dining experience. The website still refers to the dinners as " classes," which hardly paints an accurate picture. Alan Richman describes it as "the most outrageously wonderful, unfathomably underpriced, and virtually unattainable meal in New York." They're expanding from 10 to 18 seats this summer, adding two-tops and four-tops, and adjusting the lighting a bit. If it were up to me, I'd keep it just as it is but jack up the price. It's a place to focus on the food, the chef, and the shared experience. But César knows what he's doing, and I trust that he'll keep the soul of the kitchen intact.

Leland Scruby works in the Student Affairs department at The French Culinary Institute. He completed the evening culinary arts program in 2009. You can keep up with him on Twitter: twitter.com/LelandFCI.

Posted by The International Culinary Center at 1:02 PM