Tom Ryan has been a policeman in New york City for more than 15 years. And he loves it. At 18, he started out his college career in architecture. Deciding he wanted to give back to the community while he studied, Tom volunteered at his local fire department. He'd grown up cooking, learning dishes from his Irish-French-German heritage from his mother and grandmother, but it was at the fire department that he really learned to cook. Preparing large meals for the other firemen on duty and for community events became one of his favorite parts of the job. But Tom didn't head straight off to culinary school from there. What he knew was that he enjoyed helping the community more than studying about buildings and drafting. So, he switched his career path, earned his badge and donned the policeman blues, eventually making detective.

Tom was a 9/11 responder and like many others has been affected by his work at Ground Zero. Chronic obstructive pulmonary disease (COPD) and asthma eventually put him on desk duty and the track to early retirement. Still young and with a family to support, Tom had some decisions to make.

He made a short list of what he enjoyed doing and what skills he could use towards a new career. The winners: gardening and cooking. He'd always wanted to do more with cooking and now was his chance.

Tom started the classic culinary night program in the fall of 2009. He commutes into the city from his job in Queens two evenings a night and gives up his Saturday evenings with his family to study. What does he think of his new life? "I thought I was a decent cook coming into the program, but one night at the school really put me in my place. I have learned so much. If I was to quite the program today, I would walk out knowing so much more than I did when I started in September." 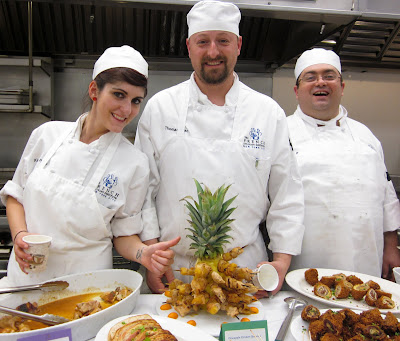 Tom Ryan flanked by two classmates at a student buffet.
It's not without sacrifice. Tom's three girls (ages 7 years old, 4 years old, and 5 months) and wife don't see him as much as they did before, and he doesn't have time to go out with friends. But taking the evening course has been well worth it in Tom's opinion. And, most importantly, he has been able to keep working while training. And what he has learned is already paying off at home, too. His older girls love to be his sous chefs in the family kitchen, and Tom and his wife make a point of inviting different friends and family over for Sunday dinner, where Tom impresses them with his newly garnered cooking techniques, every week. Making fresh pasta and cheese and smoking meats are three of his favorite things to do. He has a new smoker in his backyard with a stash of woods—hickory, mesquite, and applewood.

With graduation just around the corner, Tom is thinking about the future. What's next? "We start looking for property for a bed and breakfast in New England in June," Tom exclaims. And he is looking forward to cooking more and more for his family along with using his FCI training to make meals for his guests. With a bed and breakfast in the works, Tom is well on his way to cooking up something great.
Posted by The International Culinary Center at 2:30 PM