Three minutes to eat as many hot dog sliders as possible! That's what the 2010 Employee Hot Dog Eating Contest was all about. A new component to this year's Concours de Chien Chaud, employees from almost every department came to cheer on the contenders. Competition ran thick: Accounting rallied behind Yannick Guerin, while IT rooted for their very own Devindral Ramlal. 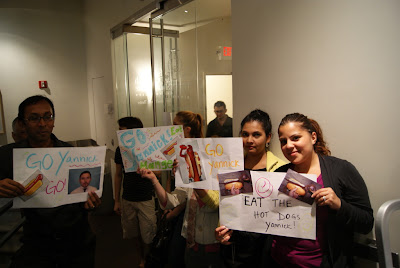 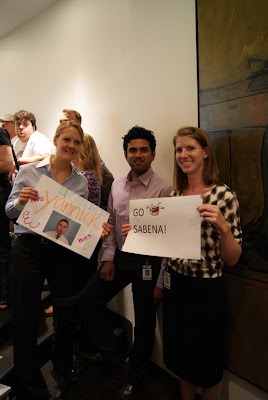 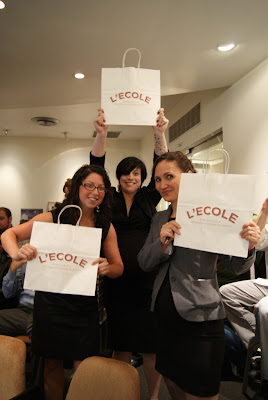 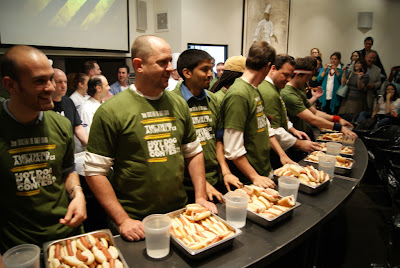 Competitors line up in front of hotel pans filled with hot dog sliders.
No one finished a complete panful.
Dave Arnold, who came dressed up to fight and win, walked out as this year's champion! David Johnson came in a close second.

David Johnson, second place winner, looks
down at his unfinished dogs.
I spoke with Loïc Ney, a Frenchman interning with both Admissions and Student Services. He did not place in the top three in the end, but clearly he was relieved when the competition finished. As he told me, "he could feel the pressure."

The timed competition was indeed an exciting moment as the crowd wildly cheered on their coworkers. It was a pleasure to witness such an enthusiastic and significant event at The FCI. Everyone had fun, while coming together for a good cause!

Doreen Sia is a level one Classic Pastry Arts student, who intends on specializing in chocolate upon graduation.

Posted by The International Culinary Center at 1:28 PM