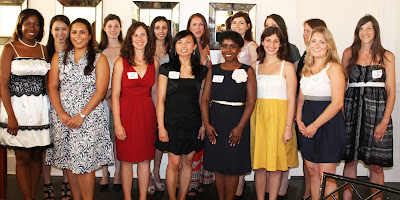 Born in Buenos Aires, Luciana Davidzon, 34, found her way to a career in food through business. Coming from a medical family (her father, husband, and brother are all doctors), she picked a different route, studying business administration at the University of Buenos Aires instead. After completing a six year program, she worked for companies such as HSBC, KPMG, PriceWaterhouseCoopers, and finally Dannon, where she worked in marketing.

After she and her husband moved to New York City six years ago, she knew she wanted to be independent and do something more creative. She had enjoyed the package design and other creative work she had done while at Dannon. With a good business head, she knew she was ready to set out on her own and started Lola Mora Catering. "Emulating what my grandmother did almost 100 years ago, I found myself as a new immigrant in a strange place, looking for a brighter future. While trying to be part of this social, economic, and cultural (fantastic and yet tough) experience called New York City, I was able to take a step forward with the opening of Lola Mora, [where we offer] a mix of Latin American, Eastern European, and French style dishes and pastries," she says.

After building her business over the past few years, Lucinana wanted to increase her skills and gain a professional edge. Enter pastry school. Starting the evening Classic Pastry Arts program this past January, she feels she can be a good example to fellow immigrants. "It can be a challenge to study with English as a second language," she says. But she also feels that if you love what you do and truly want to learn nothing is impossible.

For Luciana, this has been a great experience, but to her the greatest achievement is being awarded a $5,000 scholarship through Les Dames d'Escoffier. More than the money, she is thrilled to be able to participate in their mentoring program and even more thrilled to have been paired with Liz Neumark, owner of Great Performances. The opportunity to learn from her and ask her questions over the next year feels like an amazing grace and a boon to the success of her own fledgling catering company. Graduation may be just around the corner, but Luciana has many new and exciting food experiences just ahead to help her build her own dream.
Posted by The International Culinary Center at 1:46 PM