It's a phenomena that Mondays are commonly disliked by many people. However, what a great Monday it is knowing you'll be going on a chocolate factory tour later that day.

On Monday, September, 20th, a bunch of FCI Culinary and Pastry students, including me, went on a field trip to Williamsburg in Brooklyn. I was highly anticipating this FCI club event, as I am a huge fan of Mast Brothers Chocolate, which was our destination. 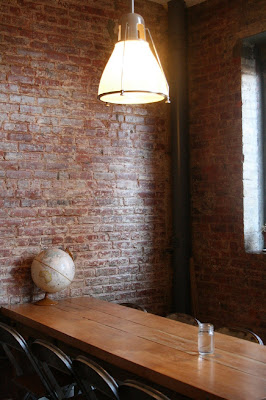 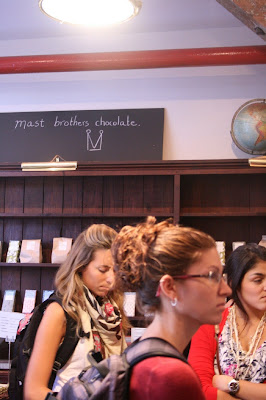 at Mast Brothers Chocolate with other FCI students
Since early 2009, Mast Brothers Chocolate's factory and shop has been located on North 3rd Street between Berry and Whythe Avenues. And this is the place where Rick and Michael Mast and their team make the magic happen. The two brothers made chocolate and experimented (they even tried brewing beer) in their kitchen for five years. 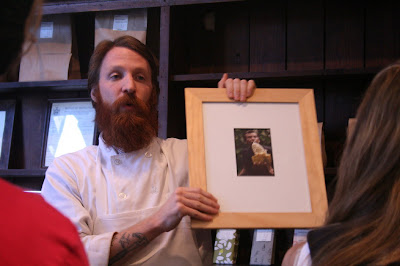 Rick Mast showing a picture of a harvested cocoa pod
Rick Mast has a culinary background and was working with Jacques Torres, where he learned how chocolate was made for large production, before turning to his own chocolate making with his brother. His goal with Mast Brothers is to focus on making each product instead of producing large quantities. 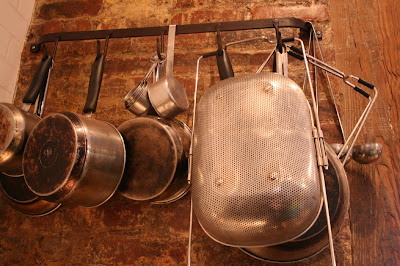 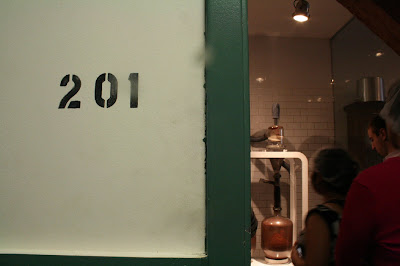 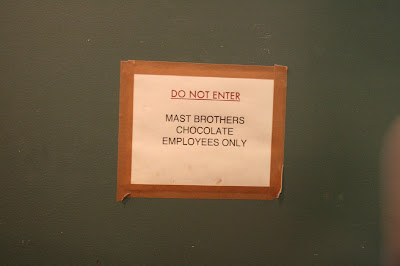 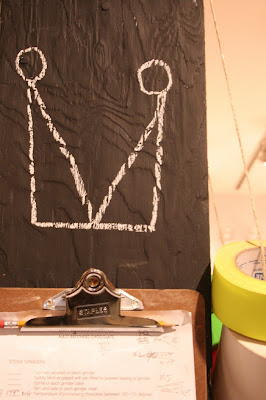 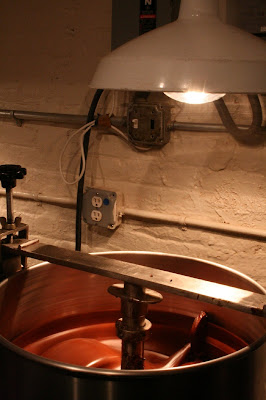 photos above: Mast Brothers factory (last photo shows conching machine)
In the shop, and sometimes even into the street, the slightly acidic chocolate smell is omnipresent. The interior of the shop and the look of the brothers themselves appear to be out of a different century, which I happen to appreciate and adore. There's the counter with the precious chocolate bars under glass and bedded on cocoa beans, then there's an old table and chairs in one corner, piled up bags of cocoa beans, plenty of vintage globes on the shelves, and, not to forget, an old sailboat model resting on the counter. The factory is viewable from behind a glass that runs between the shop and the production space, and you can also see the large table where the cocoa beans are sorted and where the finished chocolate bars get wrapped. 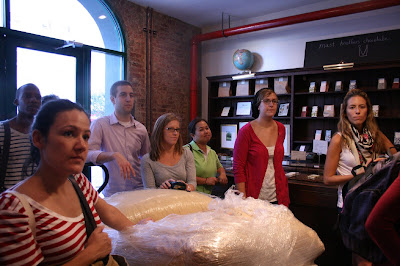 bags of cocoa beans among our group in the shop
Our tour started with a little introduction on how Mast Brothers came into existence, followed by an overview on where Mast Brothers purchases their beans, which are all fair trade and organic. A picture of a cocoa tree was passed around, and we looked at a cocoa pod that had been dried in the factory. Rick underlines that the process of making chocolate can be done at home. And I guess that is what they want to show at the factory as well. There are machines for the entire small batch production process. And this is where my interest in Mast Brothers lies: I just like start-to-finish production places. Anyway, I guess the recent video on Eater.com sums up the manufacturing of chocolate at Mast Brothers better than I can. 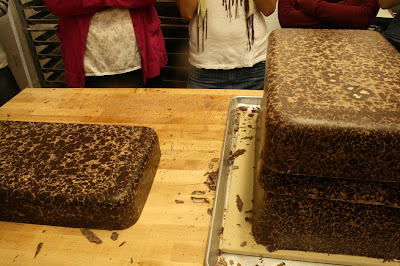 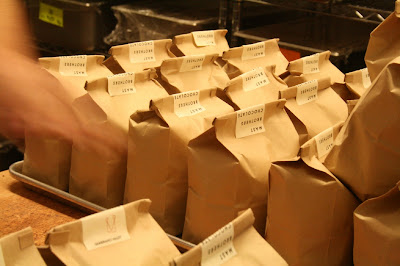 packaged baking chocolate
After seeing the tempering room at the factory, we headed back to the shop for a chocolate tasting of four different bars. Each bar was made from different beans grown in different locations: Madagascar, The Dominican Republic, and Venezuela to name a few. There are three types of beans: forastero, trinitario, and criollo (which is the most rare and expensive bean). The chocolate made out of criollo beans were the best and most aromatic chocolate I have ever eaten. However, maybe I could only tell because we tasted and compared different chocolates knowing where each came from and what their special features are. 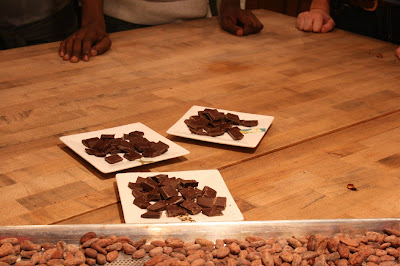 chocolate tasting
We broke the piece of chocolate we were tasting into pieces, so we could smell it and take small bites, letting the pieces melt on our tongues to get our palates ready for the whole piece to follow. I was surprised that I could actually taste the differences among the chocolates. Thanks goodness for surprises!


Jenny Kaschell is currently attending the Classic Pastry Arts program at The French Culinary Institute. Originally from Berlin, Jenny used all her time and willpower to convince her parents to lend her money for an education in New York City. She will be graduating in November.
Posted by The International Culinary Center at 1:40 PM