On the sweet side, Jerome Chang (2004) and fellow Le Cirque alums Susana Garcia and Vincent Jaoura. A pioneer in the dessert street truck scene, the original Dessert Truck has been followed up with a pastry shop/cafe, Dessert Truck Works, in the Lower East Side. Although best known for their chocolate bread pudding with either vanilla or bacon custard sauce, their other desserts, such as the warm brioche doughnuts, are also worth tucking into.

On the savory side, Oleg Voss (2002) and his brother, Gene, run Schnitzel & Things. Combining his business degree from NYU with his culinary skills, Oleg is turing out a delicious variety of schnitzels all dipped in panko and then deep-fried for a crispy, light texture. The traditional Wiener Schnitzel, made with veal, and the center-cut pork loin are two fan favorites. And the food truck won a "Rookie of the Year" Vendy in 2009. 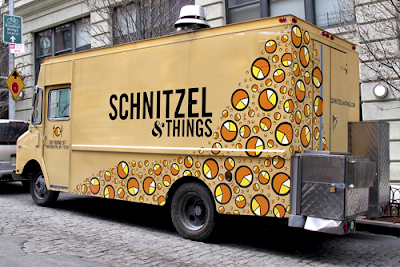 The awards will be announced at an event on Saturday, September 25th on Governor's Island. All general admission tickets are sold out, but you can check back here to see how our two grads fared!
Posted by The International Culinary Center at 11:49 AM