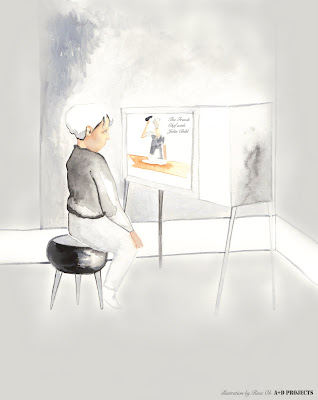 Post-World War II New York was filled with Old World-style, staid French restaurants, art galleries were showing patriotic works by Jasper Johns, and behind the scenes, Campbell's executives were buying out V8 brands. Most food advertisements were made in print media as this was before the age of digital printmaking.

Television was something new and exciting, and if you were lucky enough to own one, it was considered a luxury item. Perhaps nothing close to owning diamonds, but pretty close to owning a computer in the '70s and '80s, long before iPods or iPads were conceived. Most average folks still dined mainly at home with the occasional outing on the town. This was also an era where cooking as a profession was considered a blue collar job and not glamorous by any means. Julia Child was a television pioneer that may have inspired the launch of a whole new generation of culinary professionals.

Mark Dissin was inspired by Julia Child. He watched her growing up, perhaps the only eight-year-old amongst his friends who watched her cooking shows, but he wasn’t the only kid watching. Mark is a family guy, an Italian food aficionado, a creative television pioneer, and a risk taker, whose intuition, drive, and love of simple cooking brought him to The French Culinary Institute back in 1997. With the hopes of someday working for, then, the recently incepted Food Network cable television channel, Mark Dissin left his former production title at HBO to pursue his love of food. As a child, he frequently watched Julia Child and imitated her while recounting the cooking shows at the dinner table. His family found his passion to be amusing. Little did they know what would come from Mark's early childhood obsessions with Julia and The French Chef on Channel 13.

Mark grew up in a small town on the North Shore of Long Island. Like many successful culinary professionals, he talks about his mother’s home cooking, "she often prepared American, Jewish, and very passable French and Italian food”. His father, a WWII veteran, served in the infantry and spent the remainder of the war in Beune, France, where “he befriended the owner of the only hotel in town and traded PX goods for meals at their home.” This is perhaps where his first impression of French cuisine began. When his father returned home, he brought back with him a love of French cuisine and introduced this new passion to his wife and family.

Mark says, “My dad commuted into Manhattan every day, and we’d frequently meet him in the city after work for a night on the town. Some of my earliest food memories are of staid French restaurants, such as Le Marmiton, and Le Beq-Fin. I’m sure my parents took us on these outings in the hope of expanding our culinary horizons. Unfortunately, between the ages of seven and ten, all I wanted to eat was hamburgers.” 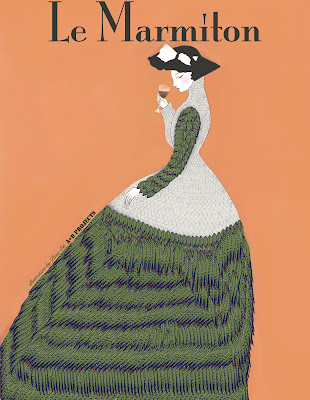 For Mark, his early childhood recollections of simple, every day meals with the family serves as the key inspiration behind his love affair now with food television. A tradition he has maintained when he held the title of full-time student at The French Culinary Institute. Mark attended the intensive six-month day program in culinary arts. How did he manage to attend school and balance out his personal life? He had the luxury to take time off from work to focus on school as his wife became the “sole breadwinner” for the family. With an incredibly supportive spouse, Lena, “finding the right school/home life balance wasn’t an issue.” He talks about being “lucky” to have the luxury of concentrating full time on his studies. This luxury allowed Mark to attend demos, hang out with his children, and study the day’s recipes before rolling up his sleeves to make dinner for the family every night—something he continues to do as often as his busy schedule allows.

Risk takers are those people who put everything they have going aside to change gears and do something else, perhaps driven by an early childhood sentiment, which is especially rewarding when committing a great sacrifice in order to pursue something different without guaranteed results. In his book To Reach a Chef: Professional Cooks in the Age of Celebrity, Michael Ruhlman writes about Mark leaving television at the age of 40 to attend The French Culinary Institute. But the tremendous sacrifices he made served as a main ingredient in his motivation to strive to finish top of his class. He still remembers the instructors who fostered his passion for learning how to cook like Julia. He says he was “fortunate in landing Chef Sixto in level one, and Chef Henri in levels two and four. I can’t imagine there’s a better pair of cooking instructors anywhere.”

Mark did not take an easy road to reach his dream job. His first job was working the line at a small Tuscan restaurant Follonico in the Flatiron District in New York City, earning $9.75 an hour. He started his culinary career behind the hot kitchen lines with the hopes of “earning back some of the lost income.” He landed the job in the Italian kitchen due to his frequent outings as a diner. The restaurant was a “60-seat jewel box, with a wood-burning oven and a great menu.” Most of the food was cooked to order—"a rough ninety-five percent." He worked the lines as garde manger, sauté, and grill soon after. It wasn’t until he left Follonico for Eleven Madison Park that he started conceptualizing ideas for future production for Food Network. He compares the two venues:

“There was a lot about Eleven Madison Park that I liked, and some things I didn’t respond very well to. For example, Kerry Heffernan, the Executive Chef, was one of the nicest and smartest cooks I’ve ever met. He was a great boss. The food was, for me, a little fussy. I worked the meat station as the entremet and was in charge of 38 different garnishes, ranging from gratins to beggar's purses to a half dozen sautéed greens, and it was more than I could handle. Plus, at Follonico we worked with tickets, while at EMP the orders were called out by the expeditor, and I had a wicked hard time remembering my orders. I think the combination of a slightly fussy menu and not being able to keep up were the only two signs I needed to make the move out of the kitchen and back into the studio.”

With that in mind, the decision to move on couldn’t have arrived at a better time. Was it luck? The right timing? Some may call it a combination of both. Mark got an offer he couldn’t refuse. In 1998 he received a call from a former colleague from HBO who had recently left the company to join the Food Network. With a producer going on maternity leave, the job of his dreams was on the horizon. Although it may seem as easy as it sounds, the job was not so easily acquired. It took countless hours of freelance jobs with the Food Network before the phone ever rang for a full-time position. The Food Network has been Mark Dissin’s first and only employer in the food media business. He recalls his one and only food styling experience doing some hands-on work for the original graphics package for 30-Minute Meals, "We filmed the tabletop portions at a stage in Knoxville where our director of photography was based. The shoot took place a week after 9/11, and the stylist we had booked to travel with us from New York refused to get on a plane. I ended up having to do much of the styling and cooking myself."

Food media work, whether that entails production work such as producing segments, culinary production, food styling, writing, or working as the star of a cooking show on television is not the glamorous job some would believe. "Days can be as long as a shift on the line." He also points out the stresses associated with the job being equivalent to putting out great food in a restaurant. With the average production crew ranging anywhere from 20 to 50 members, along with the high cost of shooting television shows, the demands of delivering on budget and on time is a lot of stressful work.

To all aspiring food stylists, Mark says, "Regarding advice for culinary students interested in food styling for television? I recommend a stint in a restaurant first. You’ll learn how to deal with multitasking and nothing on the set will ever compare to the speed and output you’ll encounter in a professional kitchen. Typically, the best cook/stylists have done some time in a restaurant."

Mark started freelancing for Food Network in December of 1999 and by April of 2000 he was promoted to Senior Producer. In 2004, he was promoted for the third time, to vice president of production after working as executive producer for two years. And the rest is history.

The Jacques Pepin plaque, a personalized Outstanding Alumni Award given to Mark Dissin for Professional Achievement is hanging in his office alongside a slew of vintage food advertising, set renderings, and some of his Emmy Awards. Mark has won three Emmys: Best Daytime Service Show Award for 30 Minute Meals in 2006; Outstanding Lifestyle Program Award for Everyday Italian in 2008; and Outstanding Culinary Program Award as co-execuive producer for Giada at Home in 2010.

Who inspires him the most? "Teachers and people who volunteer their time to help those less fortunate inspire me. Men and women who serve in the armed services and put their lives at risk inspire me. Really creative people inspire me, and, finally, my kids inspire me."

And when stars like Guy Fieri are quoted saying Mark Dissin is their inspiration, how does he feel? "Honestly, I’m touched whenever a host says something nice about me. I always think my contributions are completely superfluous since all of the heavy lifting is done by the person in front of the camera, not behind it. Guy, like many of the hosts I work with, is incredibly talented. He was born to perform, and I tell people all the time that if he were born in the middle of the 19th century, he would have figured out a way to make television shows. People tend to underestimate how difficult it is to cook on camera. You’ve got to describe processes, tell stories, manage hot equipment, and do it quickly and efficiently, and most intimidating of all you’re doing it in front of a big crew and for a home audience of tens of thousands. Anyone who thinks fronting a cooking show is easy is completely bonkers."

Rina Oh is an evening student in the classic culinary arts program and is a contributing writer on Eat Life FCI, The Hot Plate and Food2. When she's not working as a food writer or stylist, she continues developing content for her gossip blog, dining with outlaws, and illustrating a comic book series called The Gastronomic Chronicles.
Posted by The International Culinary Center at 2:41 PM