Last Friday and Saturday (February 18 and 19) The International Association of Culinary Professionals (IACP) Regional Conference was held in New York City. The conference brought together food industry professionals from a variety of backgrounds. This year the conference focused on four topics of interest:

1. communication in an electronic and digital age
2. the foods of New York
3. school food
4. farm to table: urban and rural foodways 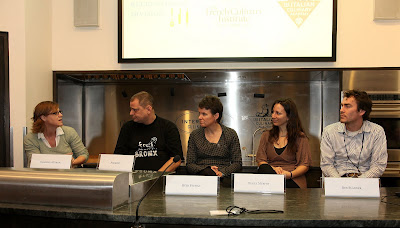 From left: Gabriella Petrick, Steve Ritz, Beth Feehan, Stacey Murphy, and Ben Flanner
Fabio Parasecoli from the New School's food studies program moderated the next panel: Chefs Who've Moved to Schools. Here, attendees were able to listen to advocates and frontlines-men, who are already working hard to make a difference, recite the realities of what they have confronted in engendering change. Bill Telepan and Nancy Easton (Wellness in the Schools), Marion Rosenfeld (The Cooking Room), Chef Bobo (The Calhoun School), and John Turenne (Sustainable Food Systems)were the panelists and candidly discussed the challenges they have faced in working to improve food in schools—what is working and what needs to be rethought and retooled. 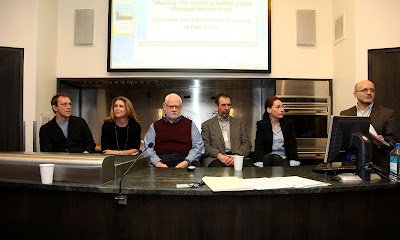 From left: Bill Telepan, Nancy Easton, Chef Bobo, John Turenne, Marion Rosenfield, and Fabio Parasecoli
The day finished with School Lunch Size Me moderated by Jack Murnighan of Babble.com. Panelists concentrated on giving suggestions on how to bring awareness of the state of food in the schools and its effect on children to a wider audience than culinary professionals, as well as the various media options that can help this effort. Panelists included Amy Kalafa and Alex Gunuey (Two Angry Moms), Avis Richards (Birds Nest Productions), Beatriz Beckford (Brooklyn Food Coalition), and Ed Bruske (Parents for Better D.C. School Food).

There is a lot of work to be done, but it is something The FCI community feels strongly about. The school community was excited to have the opportunity to participate and host this important event. Through The Future Cooks Initiative, under the direction of Phil Gutensohn, the school plans to continue to bring together the minds and efforts of the top innovators and change makers on this important issue. Add Future Cooks Initiative's new blog, The Lunch Box, to your RSS feeder to stay abreast of what's going on.
Posted by The International Culinary Center at 5:08 PM No comments:

This week, famed New Orleans chef and restaurateur John Besh announced an exciting new scholarship aimed at providing minorities in the New Orleans area with a culinary scholarship. Partnering with Jessica Bride and Nick Mayor, the John Besh & Bride Mayor Scholarship will be awarded to someone from New Orleans with aptitude in the kitchen but in need of financial assistance to realize their dream, allowing them to study in a career program at The French Culinary Institute in New York City and return to New Orleans to work for eight weeks as a paid intern at one of the restaurants in the John Besh Restaurant Group. The scholarship recipient will also be mentored by someone within the restaurant group for a full year in order to give the recipient the network and support they need to take full advantage of the opportunity. While studying in New York City, four special experiences will be tailored for the recipient to expand their knowledge of the culinary field and increase their connections with some of the industries top professionals.

You can download an application for the scholarship online.

Read more about John Besh and the new scholarship on YourLife.USAToday.com.
Posted by The International Culinary Center at 4:45 PM No comments: 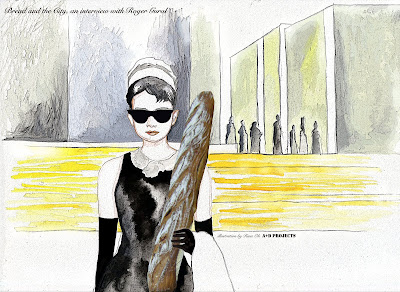 "It was through having worked for Chef Keller that I was asked to participate in the Mondial." —Roger Gural
Roger Gural was born and raised on Staten Island, New York. What started out as a hobby eventually transformed into a professional bread baking career. He began by experimenting with pizza dough, and then moved on to artisan breads after he enrolled in the six-week bread course at The FCI. The pizza bread baking resulted from a case of supply and demand: "One night, I was coming home from work, and I had planned on making pizza, but the market was out of dough. So, I made it myself. It wasn’t very good, so I did some research to figure out why, and from there I started to make my own pizza dough."

It wasn't very long after experimenting with pizza dough that his hobby led him to the SoHo location of the school, and then on to working full-time as a baker for several world-class chefs. 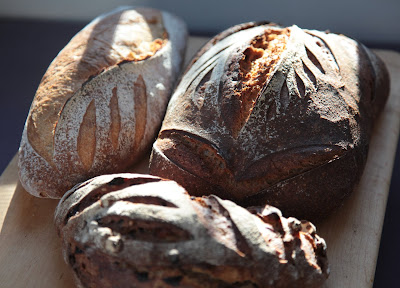 The French Culinary Institute is familiar with career changers in their student body, and Roger is one of them. He worked in the recording industry and television before switching over to bread baking, but when he started classes, he wasn't even thinking about a career in bread baking. So, how did Roger go from amateur baker to becoming one of the best? "My first job was at Bouley Bakery. When I was a student at The FCI, Chef David Bouley came through the school and toured the bread kitchen. [While there, he] mentioned to my instructor David Norman that he was looking for a baker. David encouraged me to go trail. I actually had to trail twice because I think the head baker at Bouley wasn’t too convinced, but thankfully after the second night he offered me the job. I was really lucky, because he was an incredible baker and role model. I immediately had an understanding about how much work goes into learning the craft. Later on he helped me find some places to work in France, so I am just so indebted to his generosity. He really helped introduce me to a network of super talented bakers who feel a professional responsibility to share their knowledge. After working at Bouley, I worked at Amy’s Bread, and from there [I went] to France. It was several years later when a pastry chef who had worked at The French Laundry tasted my breads and suggested that I should go work there. At that moment it wasn’t the right time, but a while later, I saw they were looking for a head baker, and I thought maybe I should go for it. After a tryout in New York City and one in Napa, California, I was offered the job." 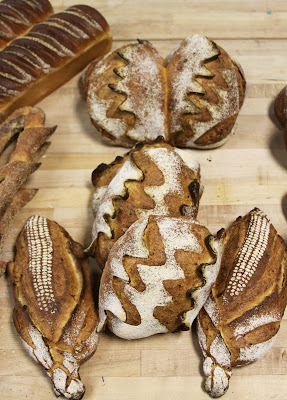 And most recently, in 2009, Roger went on to compete in the prestigious Mondial du Pain (the same convention as the Bocuse d’Or), which took place in Lyon, France, representing the United States. "It was through having worked for Chef Keller that I was asked to participate in the Mondial," he says. Competitors traveled to Lyon from all around the world and stayed for two weeks to compete. "We had to make baguettes, decorative baguettes, rolls, a health and nutrition bread, a bread representing our country, sandwiches, four different types of breakfast pastries, and a bread sculpture." Roger and his colleagues were given the chance to practice their skills in a bakery (run by the Pozzoli family). "The hospitality we received there was probably the highlight of the trip. They were incredibly generous and supportive," he says. By the end of the event, Roger was exhausted. 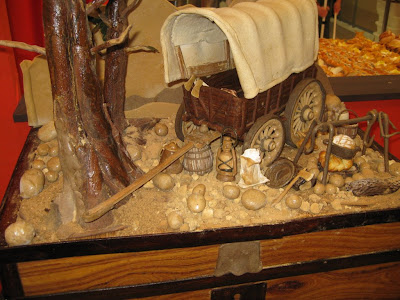 Roger's bread sculpture at Mondial du Pain
After the event, Roger enjoyed dinner with Chef Alain Sailhac (executive vice president and dean emeritus at The FCI) and his wife, Arlene, at the famed Léon de Lyon, a three-Michelin star restaurant, owned and operated by Chef Jean-Paul Lacombe. This dinner was an occasion Roger would always remember as a highlight. Part of the significance of the dinner was that it commemorated an end to the long labor-filled hours of the event and also that it was a finishing marker to the passion for learning something he loved that had brought him to this extraordinary experience of competing in the first place. 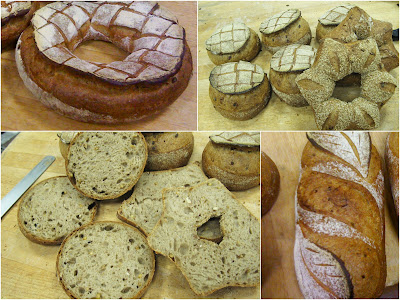 
Rina Oh is an evening student in the classic culinary arts program and is a contributing writer on Eat Life FCI, The Hot Plate and Food2. When she's not working as a food writer or stylist, she continues developing content for her gossip blog, dining with outlaws, and illustrating a comic book series called The Gastronomic Chronicles.
Posted by The International Culinary Center at 6:57 PM No comments:

For The Love of Cooking

FCI chef-instructor Tim Shaw shows Nate Berkus and his guest how to make pasta primavera (including the homemade pasta!) on The Nate Berkus Show.

Click through for Chef Tim Shaw's recipe and photos from Nate Berkus's visit.
Posted by The International Culinary Center at 6:58 PM No comments: