The FCI Chef Demo Series is Up and Running! 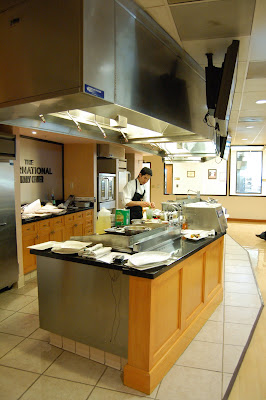 Chef Craig Koketsu
The FCI California welcomed Craig Koketsu, Bay Area native and executive chef of Quality Meats, located in midtown Manhattan, on Tuesday, April 12. Chef Craig brought it back to basics with Five and Under: Delicious and Simply Prepared Dishes with Five or Fewer Ingredients.

Craig Koketsu fostered his passion for precision, knowledge, and flavor by working with acclaimed chefs from diverse backgrounds at some of America's top restaurants. Koketsu started at Stars in Palo Alto, California, working with renowned chefs Jeremiah Tower and Joyce Goldstein.

As Craig learned about the luminaries of the culinary world, he realized that a move to New York City was crucial to work with the chefs he admired. Once in New York, Craig worked with Gray Kunz at the famed Lespinasse, and another remarkable talent, Christian Delouvrier, who replaced Kunz after his departure. Craig stayed on Delouvrier's new team and became poissonnier, which was the post he held when Lespinasse earned a four-star review from the New York Times.

From there, Craig was asked to create the concept and menu for Quality Meats, which opened in April of 2006. In 2007, he was at the helm of Park Avenue Summer, NYC’s first—literally—seasonal restaurant.

For this demo, Chef Craig shared his particular food approach. "In light of all the recent hype with modernist cuisine techniques and ingredients, I wanted to bring it back to basics. I want to focus on flavors and how simple combinations can add up to much more than the sum of the individual ingredients. The title of this demo will be Five and Under..., but there will be a few 'free' ingredients, such as butter, oil, garlic, salt, et cetera."

Attendees had the opportunity to learn about (and sample!) the following six dishes: 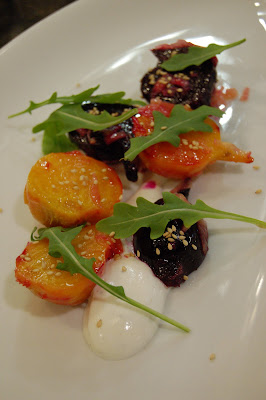 baby beet salad
Chef Craig ended the demo with a very interesting statement, referencing Malcolm Gladwell’s Outliers: The Story of Success. In his book, Gladwell repeatedly mentions the "10,000-Hour Rule," claiming that the key to success in any field is, to a large extent, a matter of practicing a specific task for a total of around 10,000 hours. Craig's kitchen translation: It can take10 years to really hit your stride as a chef! 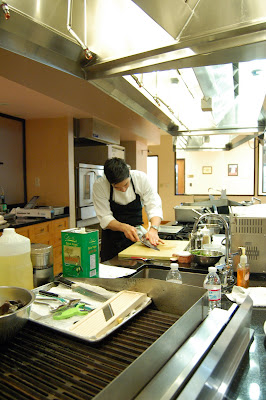 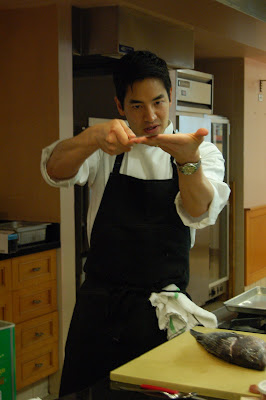 Chef Craig demonstrates proper knife blade placement for filleting fish.
"I really loved how Chef Craig demonstrated how sophisticated and tasty dishes can be relatively simple. His lesson learned early on with one of his mentoring chefs shined through—the importance of balancing sweetness, acidity, saltiness, and bitterness. Chef Craig does this very well.

"I found his tip of using a bamboo skewer to test fish very helpful—an easy way to test the fish for doneness. You insert the skewer into the top of the fish—it should go through easily, encounter resistance at the center as that part is not fully cooked, and then continue through the fish easily, as the bottom is fully cooked. The carryover heat will continue to cook the center to perfection.

"I also liked his tip of not forgetting about the cilantro stems. Another good chef lesson: Don’t waste. The stems can be used just as well as the leaves. He used them in his jalapeño-lime salsa verde, which he served with black sea bass. One of my favorite ingredients that he used today was Urfa biber (dried pepper from the Urfa region in Turkey known for it’s smoky raisin-like taste). Today’s demo was tasty and inspiring!" —Rhonda Lynn
Posted by The International Culinary Center at 1:37 PM