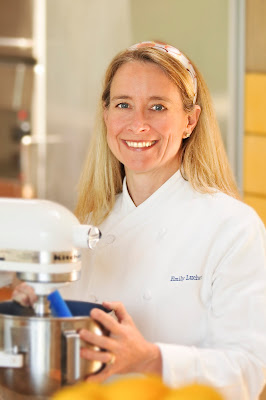 Emily Luchetti, a graduate of Denison University and the New York Restaurant School, has more than 20 years experience as an executive pastry chef. She has worked for many top restaurants, including eight years at Jeremiah Tower's Stars restaurant and Starbake, the retail bakery. She is currently the executive pastry chef at Farallon and Waterbar, both in San Francisco. Emily has written six cookbooks (including the just released The Fearless Baker, A Passion for Desserts, A Passion for Ice Cream, Stars Desserts, and Classic Stars Desserts). She is a James Beard Award winner and was named by San Francisco Chronicle on their list of "20 Visionary Chefs in the Bay Area," along with numerous other awards (too many to mention). Emily and her desserts have appeared on TV shows and in newspaper and magazine articles, and she enjoys sharing her love for baking and food with others.
Read Emily's Blog
Visit Emily's website to see what ingredients and equipment she can't live without.
Follow Emily on Twitter and on Facebook. 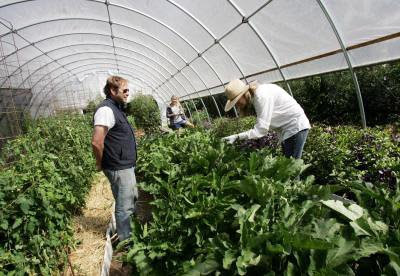 David Kinch and Cynthia Sandberg at Love Apple Farm (courtesty of Manresa Blog)
David Kinch is the executive chef/owner of Manresa in Los Gatos, California. Influenced by the California Coast, his American-style haute cuisine is very fresh and ingredient-driven. In 2006, he formed an exclusive partnership with Cynthia Sandberg of Love Apple Farm in the Santa Cruz Mountains. The farm supplies Manresa with biodynamic vegetables and provisions year-round. He is a James Beard Award Winner for Best Chefs in America, and Manresa has been awarded two Michelin stars for four consecutive years.

The school is celebrating the addition of our new deans by naming a pastry class and a culinary class in honor of each chef respectively. The Emily Luchetti Pastry Class will have the opportunity to work with the chef personally in a special session, and The David Kinch Culinary Class will go on a visit to Love Apple Farm with the chef. There are lots of exciting opportunities going on in June, so check out The FCI website for more details.

Read the full announcement of our new deans on The FCI website.
Posted by The International Culinary Center at 9:22 AM