A Visit with Harold McGee 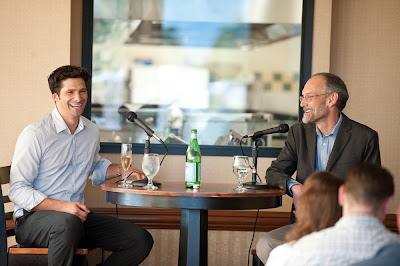 He does not have a favorite restaurant because he has been to too many to even decide. That is living the dream for anyone who loves food and it is reality for author and food science savant, Harold McGee.

McGee has been present in the food circuit since the 1984 release of his book On Food and Cooking: The Science and Lore of the Kitchen. On Food and Cooking bridged the gap between food and the science behind it, during a time when food science was only of interest in a commercial setting. The book brought practicality to curious kitchen chefs and allowed them to understand their cooking on a higher level. After several books and an increasing interest in food science within the food community, he then published a revised version of the book in 2004. On Food and Cooking is a testament of the power of desire and interest. Not coming from a food science background, but rather one based in literature and astronomy, McGee wrote his book following sheer interest and passion for the subject. He was interested in the ideas that were behind science and the science of everyday life. McGee’s interested mind created a new occupation for himself following a teaching position at Yale University. Now McGee has several books under his belt, a book regarding taste in the making, and is a columnist for the New York Times.

A few weeks ago, Harold McGee graced the halls of The International Culinary Center of California. Alumni, current students, and a few lucky open house guests were able to meet McGee during a signing for his books. Following the signing, McGee was accompanied by Paolo Luchessi of the San Francisco Chronicle for a question and answer forum. Questions regarding the Spanish and Nordic movements of cooking to the intricacies of sous vide cooking were asked.

McGee may not have come from the same kind of background as many students of The International Culinary Center, considering he has never gone to culinary school, nor even studied food during his formal education. However, McGee’s writings on food science have helped to create diversified interests among chefs. Unlike before, chefs now are knowledgeable not only about the tradition of cooking, but the science behind it as well.

McGee’s knowledge and career are highly envied and admired. Being as such, McGee was able to leave The International Culinary Center with words of advice and wisdom for those beginning careers. For writers, he stressed to write about what you like. He also noted that writing in the sciences is not heavily written about. For aspiring cooks, he said find a good place to work at and cook a lot. Great advice from a highly acclaimed food writer. Surely, students will be able to take his words to their own hearts and cooking.

Melanie Lopez graduated from the culinary arts program in June 2010. Like McGee, she traded in her scientific scholarly pursuits for other interests that explained the ideas behind everyday life. She is now pursuing a Bachelors Degree in Community and Regional Development at the University of California Davis and expects to graduate in June 2012.

Posted by The International Culinary Center at 1:13 PM