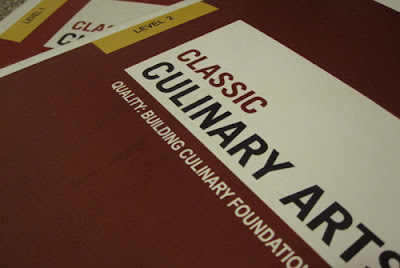 You’ll be surprised to know that since you left The Big City to teach at The French Culinary Institute's campus in California, we have been surviving without you. This is not to say that we are happy about it, nor had we intended on having any sort of fun or semblance of success while you’ve been away. But we did. So this is not necessarily a love letter.

It behooves you to know that our timing has improved. Only once have we cooked into family meal. Or twice. Okay, so maybe just three times. I’ve stopped keeping track. Don’t give me that look.

Our knife skills have become more sophisticated, accurate, and just plain pretty. We have managed to maximize efficiency and minimize waste. Though I did inadvertently mix cleaned onion trimmings with raw pork bits in my scrap bowl, a no-no that Chef did not fail to notice.

We have continued to learn from–and about–each other and grow as a class. Examples include Angelo’s ability to simply glance at his mise en place and command it to prep itself (rightly noted by Alex, who has an unwavering love for Subway’s six-foot sandwiches); Meg’s commitment to positivity, humor, and colorful kitchen tools; Aiyana’s shameless interest in ServSafe; Ell’s composure in the face of injury (and subsequent stitches, of which there were three); and Dannie’s generosity, as evidenced by her donations of spare produce and parchment paper halves to needy teams.

If you still care to know, we recently endured the demands of the Level One practical and comprehensive exam. On the fifth floor, we were corralled into an unfamiliar kitchen and forced to execute perfection in an unruly time constraint. While the beginning of the practical was nothing short of torture, the anxiety gradually thinned. My hands, which seemed riddled with tremors during the first 20 minutes of the practical, became steady somewhere in the beginning of Part Three. Maybe, though I hesitate to use the word, we eventually managed to have a little fun.

So while you’re teaching in California, remember that your kids are still here in New York, mounting nappant sauces with beurre, trussing chickens to keep their plump shapes, and watching for the first wisp of smoke in the pan before searing. Sure, we continue to slice into our fingertips while we ciseler and singe our hands on hot pot handles, but I guess you could say we’re learning by doing. And doing. And re-doing. I hope that when you return to our little family you’ll be as proud of our progress as we are.

Jax Hubbard is a registered dietitian, freelance food writer, and Classic Culinary Arts student at The French Culinary Institute. She aspires to eat well, cook without inhibition, and live to write about it.
Posted by The International Culinary Center at 3:19 PM