A Christmas Conscience: One Student's Take on Ethical Eating

Another Christmas has come. Feeling very accomplished by completing your last minute Christmas shopping you are rushing towards your local supermarket to purchase a leg of ham. You make a beeline for the meat aisle and look for the biggest leg that will feed the most people. But have you ever considered checking where this leg of ham (or at least the pig that it once belonged to) came from before it became this oh so tasty Christmas meal? Amongst the chaos and commotion of Christmas, it is often easy to forget these festive details. There use to be no such terms as “sustainable” and “organic” and food was exactly that – food. Gone are the days when the milkman delivered the crates of glass bottles fresh to peoples’ doorsteps and they knew the farmer that it came from. But in this ever-changing world, it is still very possible to know your suppliers well.

There are many reasons why we should become more conscious of what we are purchasing and choose organic and local foods, over mass-produced animal products and produce. When you purchase local organic foods you know it’s fresh without the use of mass amounts of insecticides and pesticides. Produce has not been genetically modified in any way and meat is not injected with antibiotics or hormones. Purchasing local food supports your community which in turn helps the local economy and the carbon footprint is much less, as the food doesn’t travel as far. If that isn’t enough reason for you, well locally grown, organic food just tastes better!

Much of the beef on the supermarket shelves these days have been grain fed, as opposed to eating what really makes them thrive – good old grass. It’s cheaper for the manufacturer and, admittedly, it makes for a cheaper piece of meat on the shelf for consumer. But is it really worth sacrificing the flavor and nutrients we would otherwise get for paying a few extra bucks?

Most of us know what happens on those factory farms and what the battery cage hens go through, yet many people still choose to eat this chicken and the eggs they produce because it’s cheaper. It isn’t simply for ethical reasons that I choose organic meats over the cheaper variety—I’m a big believer that the better a life an animal had and the more it was treated with respect while it was alive (and even during the slaughter process for that matter), the more wonderful the meat will taste.

There are loads of local farmers markets around New York City that are open on various days during the week and weekend. You can find one in your neighborhood at www.grownyc.org. These markets not only include produce, but also meats, seafood, breads, grains, dairy, and much more. There are also many butchers appearing around the city that sell only organic and grass-fed beef. Every time I walk past my local organic butcher they are jam-packed with customers. This is a sign that consumers are indeed becoming more aware of the importance of what they are eating. 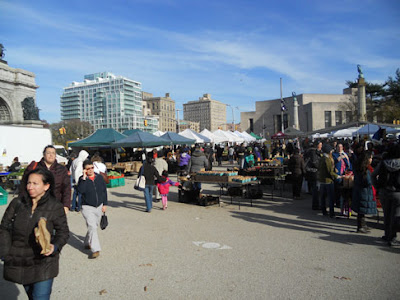 So on Christmas day, if you’re lucky enough to eat a leg of ham, hopefully it once belonged to a pig that got to roll around in the mud and ate well itself. And while you’re at it, slather on some cranberry sauce made from locally grown cranberries. You may just enjoy it that much more.

Emma is originally from New Zealand and is a Classic Culinary Arts student at The French Culinary Institute. She is inspired by cuisines of different cultures and loves to cook for anyone willing to eat her food.
Posted by The International Culinary Center at 7:01 PM