A Demo with Chef Francois Kwaku-Dongo 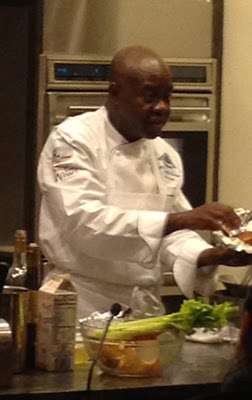 “Passion is what gets us into the kitchen, desire is what keeps us there” is what Chef Francois Kwaku-Dongo said as he sweated his aromatics for a sauce to go with his short ribs. This past Wednesday we had the honor of having Chef Francois, executive chef of The Wharf restaurant at the Madison Beach Hotel in Madison, Connecticut; join us for a demonstration on combining sweet and savory flavors in dishes.

Chef Francois is the culmination of hard work and determination. To those who think they’re already too old to be great chefs, that they didn’t start cooking at the age of 15, take solace in the fact that Chef Francois came to New York City from Côte d’Ivoire at the age of 24 and started out delivering pizzas. He worked his way up from dishwasher to executive chef of one of Wolfgang Puck’s restaurants. But he did not stop there; he is also partner of the Omanhene cocoa bean company in Ghana and sells his chocolate to chefs and restaurants worldwide.

I had the pleasure of helping Chef Francois with his demonstration. I was in charge of setting up his mise en place: cutting carrots, celery, and onions into macedoine; measuring out his flour, butter, and panko. The real work didn’t start until he asked me and my friend Ryhan to roll out his sweet potato gnocchi. Chef told us, “It is a chef’s goal to teach their cooks how to do something better than they can. That way, when we are not there, we know they will do it perfectly each time.” Well, I can say I learned how to roll gnocchi (decently), but I’m thousands of gnocchi away from being anywhere in Chef Francois’s skill range. 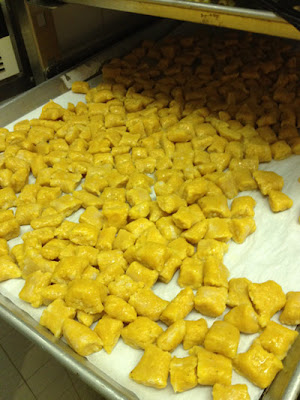 For the demo Chef Francois made Mustard and Chocolate Braised Short Ribs served over Sweet Potato Gnocchi. As Chef braised the short ribs, the aroma lured in passersby to poke their heads into the kitchen and find out what was that delicious smell could be. But Chef Francois did more than cook for us, he painted us the story of his journey through the many kitchens that fostered his growth and fueled his passion to cook. The gnocchi represented the beginning of his career in the Italian kitchen that would spur his desire to cook. The braising represented his desire to master a myriad of cooking techniques in the kitchen. And the use of chocolate as a crust for the ribs represented his humble beginnings picking cocoa beans on his family farm in Côte d’Ivoire.

The ribs were cooked perfectly and were very tender. The gnocchi were soft and delicious. There was just the right amount of chocolate and mustard on the ribs; neither of them overpowered the dish, but instead brushed your taste buds lightly, so ephemerally that they were there and then gone.

Chef stayed after the presentation for a bit to talk to students and I retreated into the kitchen to help clean up. Afterwards I looked back into the amphitheater and Chef was gone. So I gathered my belongings and was ready to head out when I saw Chef Francois going down the stairs, about to exit the school. I called his name, thanked him for letting me help him, and asked him one last question. I asked him what a culinary student should look for when looking for a restaurant to work in. He told me, “Work somewhere where they do everything in house. Look for a restaurant that makes its pasta, bakes its bread, and makes everything from scratch. And when you have to work prep, do the best prep you can do. Go to work every day and prep better than you did the day before. Everything is built from the basics, so learn them well.”

Jonathan was born and raised on Long Island and grew up eating and loving great seafood. His mother is a great cook and his grandfather was an Italian chef; both instilled in him a love for food. He is passionate about using fresh, local ingredients in his cooking and is currently enrolled in the Classic Culinary Arts Honors Program.

Posted by The International Culinary Center at 3:31 PM