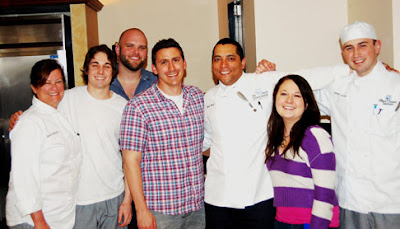 The International Culinary Center welcomed Chef Brad Farmerie to our California campus on Monday, April 16 for a Q&A with students. Chef Farmerie is a partner and chef in the award winning AvroKO Hospitality Group. AvroKO is a unique design and concept firm that also owns and manages four restaurant properties in Manhattan. The group will soon be making their debut on the West Coast with Fagiani’s, set to open in one of Downtown Napa’s most historic buildings.

AvroKO’s first restaurant, Public, opened in New York City, nine years ago. Brad noted that, at first, the public was a bit skeptical of the cuisine, but he was committed to cooking food that inspired him. His vision earned this unique “Australasian” restaurant a Michelin star. Their second restaurant, Saxon + Parole, opened four years ago under the guise of the Asian fusion/British colonial, Double Crown. Brad acknowledged the importance of reinventing oneself. The new reincarnation of the space features “grilled meats and aquatic delights.” Both restaurants each boast adjacent cocktail bars with an array of spirits and intelligently crafted, innovative cocktails.

Chef Brad’s culinary career launched in 1995, following extensive world travel. He found that his passion for food and travel trumped mechanical engineering, and he enrolled in culinary school in the UK.

When asked about his culinary style, and the inspiration for Fagiani’s, he explained that international travel experience is at the core. The execution of his vision happens via quality ingredients presented simply, but layered with complex flavor.

While on the topic of his background, Chef Brad shared a recent, eye-opening collaboration with Nestle where he was invited to partner with them on product development. His initial reaction was, ‘Why would I be interested in something with a corporate giant like Nestlé?” He then realized that Nestlé sells one million pieces of food a day, while he may serve 200 people a night, and that by working with Nestlé, there was enormous potential to impact millions of Americans.

Chef Brad offered wonderful advice throughout his presentation, and it was apparent that he had an impact on the attendees, and perhaps even recruited potential employees! He concluded by saying that a cook or chef has to find the food and environment that makes him/her feel excited every day at work. This is different for everyone. But in order to be successful, you must have passion and enjoy what you do.


Sophie Spano is an intern at The International Culinary Center, studying foreign languages and business at the Université du Sud Toulon Var which is located in the southern France.

Posted by The International Culinary Center at 4:27 PM