What a difference nine months can make. I started in the inaugural Classic Culinary Arts Honors Program at The International Culinary Center, founded as The French Culinary Institute on December 29 of last year.

When I started this program, I was, for the most part, unaware of celebrity chefs and other well-known icons of the culinary industry. That is, until André Soltner came to talk to our class, giving us a demo on knife cutting techniques.

André Soltner is perhaps most well known in the US as the owner and executive chef of Lutèce, where he thrived for over three decades and raised French cuisine to an art form in New York. What is so amazing is that he is self taught, having started in kitchens at age 15. He worked his way to the top of his game, and he’s now giving back to the education of future chefs as dean at The International Culinary Center.

The Potato Chain
Who would even think it possible to cut a potato into a chain? Let me attest to the fact that it is totally doable. You, too, will be able to accomplish this after reading this blog post and trying it yourself.

Potato chain step-by-step process (see illustrations):
1. Wash and remove the skin from a large starchy potato, e.g., Idaho potato. Once peeled, put into acidulated water or water with a squeeze of lemon juice briefly to prevent it from oxidizing too quickly.
2. Cut the potato lengthwise into planks about 2/10ths of an inch thick using a chef’s knife.
3. Take one plank you’ve just cut (be sure to work on one plank at a time) and cut slits in it about a centimeter apart using a paring knife. 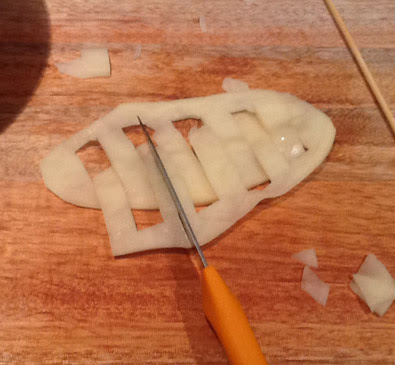 4. Use a skewer to weave in and out of the slits from one side of the potato plank to the other (i.e., weave over under, etc.) 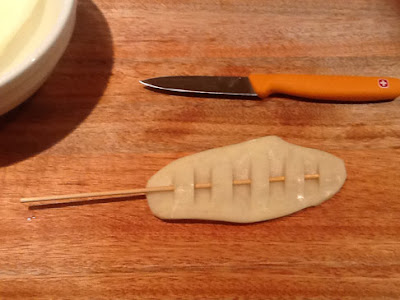 The first time you attempt this, it may not give you a full chain. You may end up with a link or two, but keep at it. If you practice this two to three times, you’ll have it down. Then, you will noticeably get faster when you set out to produce it again and again.

You may ask whether or not it’s worth the trouble. Chef André told us that you want to enhance the experience of your guests, make their meal memorable. “If you put a fried potato chain on a customer’s plate, they will never forget it,” André Soltner.

I went home and cut up potatoes until I got this skill down. Now, I too am sharing the experience. Thank you, Chef André.

Heidi Tickle is a current International Culinary Center student in the Classic Culinary Arts Honors Program. She has over 16 years of experience managing teams and writing policy within financial services. She most recently started a hot sauce company, which led her to The International Culinary Center for continued education. Heidi also enjoys writing for her blog, Tickle Sauce.

Posted by The International Culinary Center at 5:53 PM