Chocolate Showpieces, Jacques Torres, and the Best Class Ever 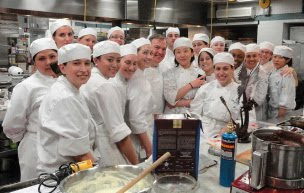 Jacques Torres with my class

I graduated from the Classic Pastry Arts program at The International Culinary Center this past June. At first I was relieved to be done with exams and have Friday nights free (I was taking the Monday, Wednesday, and Friday evening course). Now, three months later I'm really missing school and I find myself reminiscing about my classes, none more so than the chocolate class that Chef Jacques Torres taught. 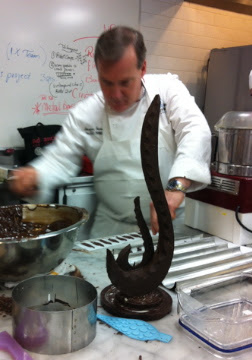 We had a chocolate showpiece project coming up, so Jacques Torres--or Chef Jacques as we were told to call him--demoed how to make a chocolate showpiece. He talked about finding the focal point, designing a shape that is pleasing to the eye, and the proper proportions of width to height. He showed us how to mold odd shapes out of chocolate using rubber or cardboard bands (which enable you to make the piece thicker than you could if you were trying to cut it out) and how to use metal rings to mold the circles for the base (again, this makes things thicker than if you just cut out the shape). That's how he made the main structure of the showpiece. 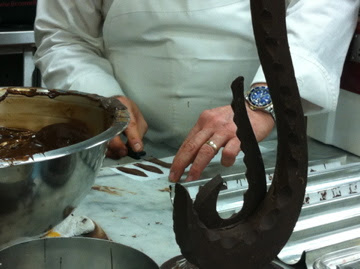 Chef Jacques making flower petals and the tuile mold used for curving them. Also you can see the notching in the edges of curved pieces of chocolate that form the showpiece's structure.

He also showed us how to make abstract flowers (by forming petals with a paring knife dipped in chocolate and curving them in a tuile mold) and paint chocolate onto textured molds—in this case to make wings for a butterfly and leaf-like decorations for the base. He taught us how to cut fluted edges out of chunks of chocolate and glue everything together. One of the best construction tips was to cross-hatch the surfaces you will be gluing together before you pipe or spread on the untempered (yes, untempered) chocolate "glue."

The finished flower
Finally, he showed us a really cool technique to make a kind of dough out of chocolate that will harden properly (in contrast to modeling chocolate that doesn't harden completely). You put chocolate (regular old pistoles or chunks from a bar of chocolate) into a food processor and blitz until the chocolate becomes a dough—this may require adding a bit of external heat, but don't use too much or it will melt as Chef Jacques so helpfully demonstrated. Once it forms a stiff dough you can mold it like clay into complex shapes, in this case, the stamen of the flower, antennae for the butterfly, and decorative curvy bits to add movement to the top of the showpiece. These decorations, plus a little bit of petal dust on the butterfly, made for a beautiful showpiece.

The most amazing thing about it is that Chef Jacques made it from scratch in about two-and-a-half hours, including gathering his equipment! (To give some perspective, we had more than eight hours to make our showpieces.) I have to say, this lesson helped me feel somewhat more confident about being able to make my own showpiece... not to mention, it gave me some really great ideas for techniques I could use. I did end up incorporating some of the things he talked about (the metal ring mold trick and the cross-hatching technique both came in handy) but my well planned showpiece was not half as impressive as the one that Chef Jacques made, from concept to final product, in a couple of hours. I guess they call him Mr. Chocolate for a reason!