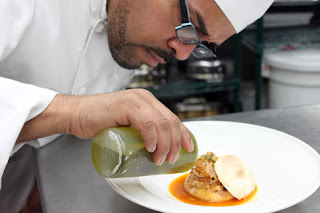 Carlos Castera admits that he used to go to José Andrés’ restaurant, Jaleo, and dream about being in the kitchen. Back then he was working as a union representative, but in his free time he’d be at home replicating the meals he’d eat at restaurants.

And if Carlos didn’t end up at The International Culinary Center as a Spanish Culinary Arts student, he may have had a lot of “what if” thoughts stuck in his head right now:

What if I never won that scholarship to attend the Spanish Culinary Arts program?

What if I never got to meet Chef José during my classes?

What if I never got the chance to go to the school’s career fair and meet with Jose Andres’ team and apply for the sous-chef training program?

What if I never went to Spain and trailed Chef José to his favorite restaurants and farms?

Luckily, Carlos had the opportunity to go to school, practice classic tapas dishes, and travel around Spain to learn the origin of the cuisine. And now he can say he is part of the management team at Jaleo—his dream job.

He scored a three-month training program within Chef José’s ThinkFood Group, which sets Carlos up for a sous-chef position once he completes the program next month.

“I’m living the dream. I can say I’m management,” he admits. “The other day I went to grab ice, and I ran into José who asked how I was doing and wanted to check in on me. Then, in the middle of the restaurant, he gave me a hug.”

Carlos describes his culinary adventure as a big puzzle. The culinary principles and techniques he learned in class have been put to use over 100 times in the restaurant; and when he plates a piece of jamón he refers back to his trip to Spain.

“In Spain, I learned about the products I now work with. A lot of people just see jamón, but I see the whole process,” says Carlos. “It’s a big puzzle and now I’m putting it together.” 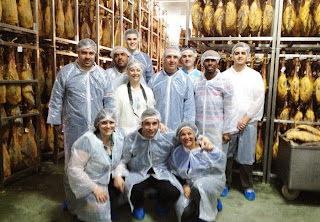 Interesting in studying a specific cuisine? Study with us in Italy, Spain, or France!
Posted by The International Culinary Center at 3:13 PM