What Happens When Science and Food Get Married? 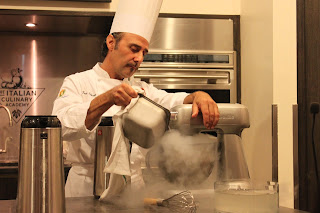 You see things outside the culinary box. Chef Herve Malivert, director of food technology at The International Culinary Center, took students and alums through a tour of simple modern gastronomy even the home cook can conquer. That is, if you can get your hands on some liquid nitrogen. To learn more about our career programs, visit http://bit.ly/1gAVKyz.

1. Faux Noodles
As I watched Chef Herve transform oil and water into a "noodle," all I could do was scratch my head. How could he even get oil and water to emulsify when the two are intrinsically polar opposites? This was the first magic trick Chef Herve pulled out of his hat during his food technology demonstration, and it involved the help of a chemical called methyl cellulose. Adding less than 1 percent of methyl cellulose will allow the oil and water to emulsify into a mayo-like consistency. He used this concoction to add another dimension to consommé, a clear soup. Using a squeeze bottle, he piped tiny strips of the emulsion into the soup, which solidified when it came in contact with the hot liquid. The noodle resembled the texture of soft Udon. 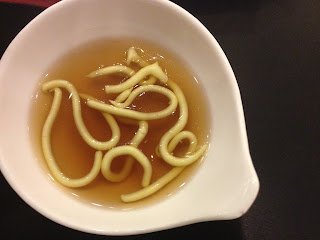 2. Coca Cola Caviar?
Transforming any liquid into a tiny, pearl of jelly is an interesting way to add a pop--literally!--of flavor to a dish. Chef Herve took the popular soda, Coca Cola, added 1 percent agar, a gelling agent, to it and dripped the soda into a water bath containing 5 to 8 percent lactate, which solidified the Coke into little balls of caviar. Only bathe the caviar in this solution for a minute--the longer it's submerge, the denser the gel will become. 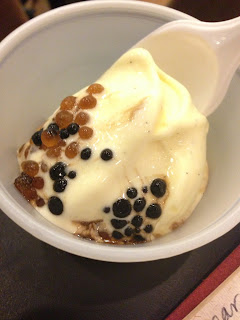 
Posted by The International Culinary Center at 12:51 PM